It’s hard to know what to say to introduce this page. Like tens of millions of others, the Bogopolsky family were caught in the gears of cataclysmic events over which they had no control. When one reflects upon the history of the first half of the 20th century, with two world wars, revolutions, depressions, famines, turmoil and upheaval in every corner of the globe, it’s  easy to understand how few people were left untouched. As Jews, the Bogopolskys were in the crosshairs of both sides, as this page readily attests. And while the clouds of a total war for national survival were forming between Germany and the USSR, both sides targeted their Jewish populations and found time and resources to attack them.

Kislovodsk, Massacre of the Jews by Nazi forces

Kislovodsk, Kislovodsk County, Ordzhonikidze (today Stavropol ) District, Russia Jews first settled in Kislovodsk after the middle of the 19th century. In 1939 the Jewish population of 766 comprised 1.5 percent of the total city population. Between the beginning of the war and early August 1942 Kislovodsk, in the Soviet interior, accommodated more than 6,000 evacuees and refugees from the Crimea, the Rostov District, and other areas. On August 5, 1942 it became known that the Germans were approaching Mineralnyye Vody. The evacuation of local sanatoria and offices began but it was not organized properly and many people remained in Kislovodsk because of bureaucratic obstacles. Some residents attempted to flee from the city on their own but it was too late since Kislovodsk was occupied by the Germans on August 10, 1942. The German authorities issued an order that required the Jewish population to be registered. Then a Judenrat of seven members was appointed. Two days later the Jews were required to wear white Stars of David badges on their chests. Then the Jews were forced to pay a “tax,” which was collected by the Judenrat. The Jewish men performed forced labor, e.g., building roads and an air field. The Jews in Kislovodsk were killed in several murder operations. More than 1,800 local Jews were shot, together with other Jews, in Mineralnyye Vody, near the glass factory in early September 1942. In late August – early September 1942 a local school building was used as a Gestapo prison. 150 Jews were brought there from the Crimea and other places in the Stavropol District. Some sources stated that this number included some non-Jews. The building was guarded by four armed policemen. For about three weeks the Jews were kept in the school building without being given any food. When some of these prisoners were allowed to leave the building in search of food, they were able to make contact with the local population. The shooting of the Jewish prisoners was carried out in September 1942. Kislovodsk was liberated by the Red Army on January 10, 1943.

The following is an account of the events leading up to the massacre, and the killings themselves, provided by the Jewish Virtual Library.

The Deportation and Killing
of the Jews of Kislovodsk

Destruction of the Jewish Population of Kislovodsk
Protocol

We, the undersigned, citizens of the city of Kislovodsk: Pyotr Aleksandrovich Ostankov, Professor of Leningrad Medical Institute No. 1, distinguished scientist, living at Clara Zetkin Street 4; Timofei Yefremovich Gnilorybov, professor, Head Surgeon at the convalescent home of Kislovodsk, living at Paris Commune Street No. 9; Mikhail Yefimovich Gontaryov, assistant at the Medical Institute in Leningrad, living at Paris Commune Street No. 9; Mikhail Zakharovich Fingerut, living at Ch’kalov 42a; Naum Mikhaylovich Gorelik, living at Ch’kalov No. 45; Yevgenya Terentyevna Kovnatnaya, living at Volodarskaya No. 3; and Boris Yakovlevich Khshive, living at Terski Square No. 1/4, have compiled this protocol on the crimes of the Jewish nationality, residents of the city of Kislovodsk, in the region of Stravropol.

On August 16, 1942, the German Command and its representatives, the military commander of the city of Kislovodsk, Pohl, and the head of the Gestapo, Welben, set up a Jewish Committee in the city of Kislovodsk, under the chairmanship of Moisey Samoylovich Beninson, born 1878 (dentist, who lived at Stalin Street 22). He was told by the German Command to collect from the Jewish population and hand over immediately such valuables as gold, diamonds, silver, carpets, clothing, linens and shoes.

In the hope of saving Jewish lives by handing over the above valuables to the Germans, the Jewish Committee collected and delivered to the German Commander, Pohl, 100,000 rubles in cash, 530 articles made of gold or silver, rings, watches, cigarette cases, 105 dozen silver spoons, 230 pairs of shoes, men’s suits, coats, and carpets. According to market prices this contribution [forced levy] was worth about 5,000,000 rubles.

On August 18, 1942, the military commander of the City of Kislovodsk, Pohl, ordered a register to be made of the Jewish population without regard to sex or age. After the registration all persons of Jewish nationality were ordered to wear an identifying mark on the right side of the chest – a six-cornered star – which they call the “Star of David.”

The Jewish population between the ages of 16 through 60 was rounded up by the German Command for various forms of forced labor: for the building of the airfield, and the paving of the roads. The doctors and professors were made to sweep and clean the streets. The work was done without any payment.

On September 7, 1942, the German Command No. 12 issued an order requiring the Jews to report to the railway station (at the freight station) on September 9, to take with them baggage not exceeding 20 kgs. in weight, valuables, and food for two days, in order, it was indicated, to travel from there to “sparsely populated” places in the Ukraine. They were ordered to hand in to Command No. 12 the keys of their apartments, each key to be marked with a label with the address.

On September 9, 1942, 2,000 Jews assembled at the freight station in Kislovodsk, including aged people, women and children. The Nazis took the hand baggage and also the food from the Jews, who were loaded onto 18 open freight cars and two covered cars, which stood ready for this purpose. The train then pulled out with a reinforced German guard in the direction of the railway station of Mineralnya Vody, where, according to eye-witnesses, the Jews were shot.

Among those deported and shot by the Germans were many medical workers including: Professor Baumholtz, Dr. Chatzki and his family, Dr. Schwarzman, the physician Sokolski, Dr. Mereynes, Dr. Drivinski and the Jewish writer Bregman. Altogether 117 medical workers perished.

Many of the Jews committed suicide because of the danger of brutality by the German Command against the Jews; these included Dr. Wilenski and his wife; Dr. Bugayevskaya and the nurse Pokrovskaya.

Dr. Feinberg, his wife and daughter tried to commit suicide by taking morphine and cutting their arteries, but the vile Germans did not let them die; they moved them to the clinic, cured them and shot them afterwards.

The citizen Fingerut, who escaped the shooting of the Jews, gave detailed evidence on the course of the shooting.

The train with the deported Jews arrived at the glass factory. The Germans who accompanied the transport ordered the Jews to get down from the freight cars, hand over their money and valuables, and then ordered them to undress.

With heart-rending cries the women, children and old people took off their clothing and stood dressed only in their underwear. Afterwards this mass of people, almost out of its mind with fear, was taken away to the anti-tank ditches, surrounded by German guards carrying submachine-guns. Anyone who tried to escape was shot dead.

At the ditches the Germans shot the Jews with submachine-guns and machine-guns.

The Germans took out 40 persons – men – and forced them to collect and load on the freight cars all the possessions of those who had been shot and afterwards took them, too, to the ditch and shot them.

The facts stated above are confirmed by the following:

Below is a reproduction of the database entries from Yad Vashem for Nathan, Olga, and Emma.

In September 1942 the Jews who had been imprisoned in the local school, were driven beyond the Podkumok River to the area of Koltso Mountain. First the men were taken and then the women, together with the children. The victims were shot in two trenches, the first located 250 meters from the road leading from Kislovodsk to Pervomayskiy village, and the second one – one hundred meters from the same road. Probably during September, several shootings of Jews took place. The number of victims ranged from 150 to 322. In August 1942 a small group of Jewish artisans, such as shoemakers and tailors, were forced to work for Gestapo officers. These Jews, as well as their family members, remained alive until early January 1943, when they were shot to death, also in the area of Koltso Mountain.

The Great Purge or the Great Terror  (Russian: Большой террор) was a campaign of political repression in the Soviet Union which occurred from 1936 to 1938.[6] It involved a large scale repression of wealthy peasants (labeled as “kulaks“), genocidal acts against ethnic minorities, a purge of the Communist Party and government officials, and the Red Army leadership, widespread police surveillance, suspicion of saboteurs, counter-revolutionaries, imprisonment, and arbitrary executions.[7][8] Historians estimate the total number of deaths due to State repression in 1937–38 to be between 680,000 and 1,200,000.[1][2] 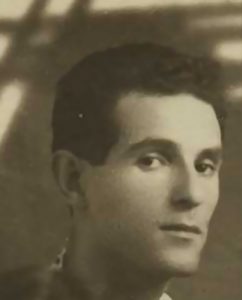 Alexander Bogopolsky was arrested by Soviet authorities on March 16, 1938 on charges of spying. A trial followed on October 4, 1938 and on November 4, 1938 he was shot in in the city of Krasnodar. In 1954 his son Meyer petitioned for a reconsideration and some 6 years later the court found Alexander posthumously innocent of all charges. Below we include some documents recently obtained by Dimitry Bogopolsky from official archives. Soon, we hope to make a translation available.